I’ve never had this urge myself (well, perhaps in the shower!!) But I have seen it in action a few times… When some kids get on a horse they feel the urge to speak and sing… One of our Saturday girls from Sandra Jones, Pepe, sings to herself and her horse when they are on an outride… and sometimes when they are in the round school too!! CJ, another young boy who rides with us, sometimes sings the latest pop song – though this might perhaps be more in an effort to keep us young and hip rather than anything else…

And last week Wednesday, there was Lothando from KGVI, who we heard is usually completely silent at school.  But by the time we walked Lothando into the round school something had loosened up inside him. He didn’t stop chattering to us the whole lesson! We weren’t sure how much Lotando actually understands but he is a beautiful mimic, cheerily repeating everything we said to him, constantly saying hello and goodbye and even using swear words in his sentences, all delivered with a huge smile on his face that we couldn’t help returning…

Speaking of vocal children, there was Alisha… Alisha doesn’t do well with strange new experiences and we should have realized this sooner. Her therapists suggested that she might calm down if we put her on a horse and walked her around. (After all, this has worked before…) But everything was far too overwhelming for her and she screamed until we took her off and even when she was restored to the safety of the KGVI bus. If Alisha comes back next week we will have a whole different approach for her, easing her into what must seem to her as the chaos of our sessions and a more careful planned introduction to animals. It’s certainly not just the kids who are learning during these sessions!!

Our Wednesday group includes Dickens, with whom last week, we weren’t able to do much as it takes three people to help stabilize him on the horse. This week Cynthia volunteered to ride with him and help support him. And this was really successful! Cynthia said she could feel his legs relaxing and he was able to hold himself more upright by leaning against her. Hopefully over time his core muscles will strengthen. Thank you for doing this Cynthia!!

Thursday’s session was also full – with three of the kids riding in saddles for the first time, and learning to post. To two of them this came easily, but the other child didn’t have the leg strength to master this as yet, but we are confident she will get it in time. Mike had a break-through in balance, he sorely missed Sandy and was totally lacking confidence but suddenly found himself, and the expression of pure joy on his face was priceless. 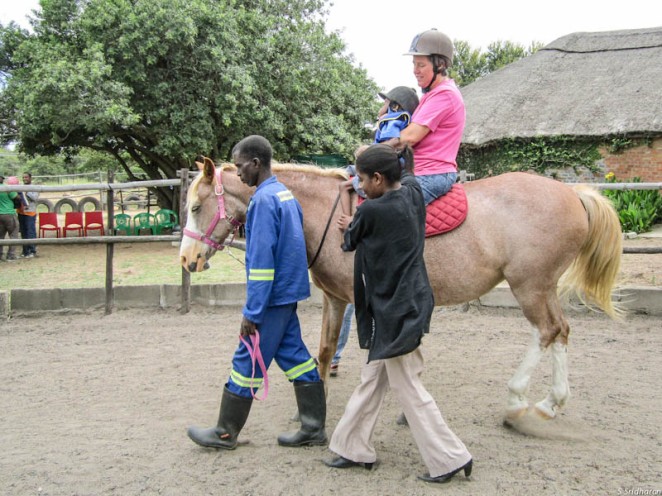 We would be grateful if you would like to contribute to helping us help others. No contribution is too small! If outside USA you can give below. If within USA, see options on left.